...a Medieval village, set on a small hill over looking what were once marshlands but now replaced with fields of rice.

Wander through its winding narrow streets up to the small gothic church of Sant Pere, to soak up the 360 degree panoramic view of the distant Pyrennes at one end of the valley and the sea with its jagged peaks of the Medes Islands at the other.

This is Pals. It’s a special place. 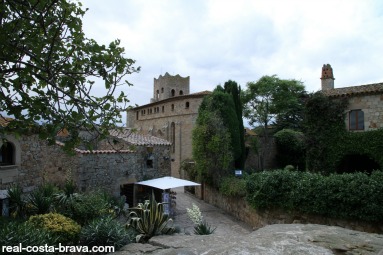 “Pals shouldn’t only be visited once, it should be visited one hundred times” - Josep Pla (one of Catalunya’s most famous writers)

A stones throw from the long sandy shores of Platja de Pals, behind Masos de Pals (the modern town) is Mont Aspre - on top of which sits historic Pals.

It was one of the first Medieval villages on the Costa Brava to be restored over a 30 year period (having taken a battering in the Spanish civil war).

Now it is one of the most visited and best preserved historical places on the Costa Brava.

As well as the village itself to explore, there are a few tourist shops to potter about in selling similar wares (clothes, jewellery, postcards, pottery), the Underwater Archeological Museum and the Catalan Wine and Champagne exhibition - both housed in the Museum-Cultural Centre.

Stop off at Pals Tourist Office on Placa Mayor, 7 - to make the most of your visit.

Before you head back down to the beach, it is worth having a quick look at the 18th Century church of Els Masos in Masos de Pals.

Want to see a little more of Pals before you visit? Take a look at this video...

Whilst you are in this part of the Baix Emporda, it is also well worth visiting Peratallada and Ullastret - two more stunning medieval villages. At Ullastret you will also find well preserved Iberian ruins.

Where to stay in Pals...

How To Get Pals

The road to Pals is sign posted from the C31 Palafrugell to L'Estartit road, that runs behind Platja de Pals. Click on the map below to see the exact location of Pals old town...